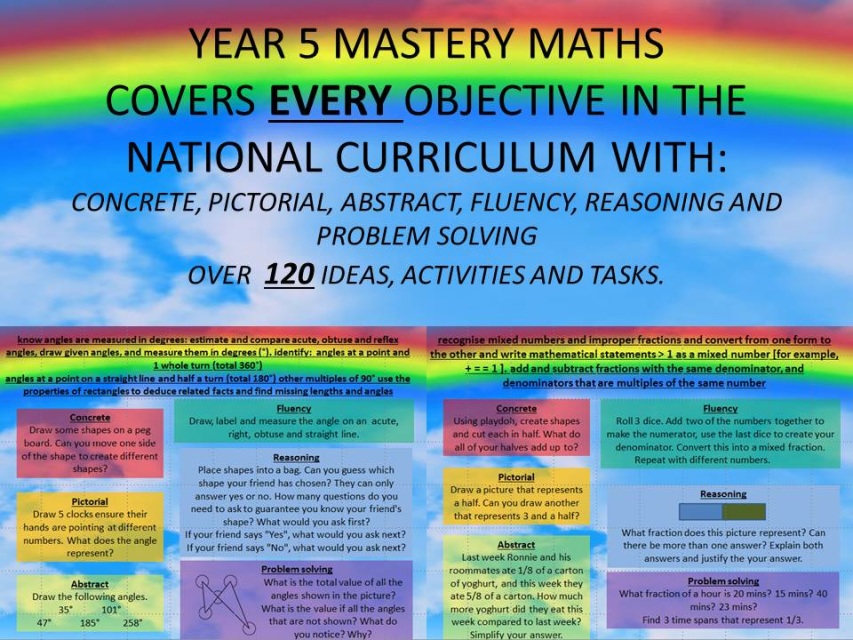 OBJECTIVES INCLUDE:
Year 5 objectives
•read, write, order and compare numbers to at least 1,000,000 and determine the value of each digit
•count forwards or backwards in steps of powers of 10 for any given number up to 1,000,000
•interpret negative numbers in context, count forwards and backwards with positive and negative whole numbers, including through 0
•round any number up to 1,000,000 to the nearest 10, 100, 1,000, 10,000 and 100,000
•solve number problems and practical problems that involve all of the above
•read Roman numerals to 1,000 (M) and recognise years written in Roman numerals
•add and subtract whole numbers with more than 4 digits, including using formal written methods (columnar addition and subtraction)
•add and subtract numbers mentally with increasingly large numbers
•use rounding to check answers to calculations and determine, in the context of a problem, levels of accuracy
•solve addition and subtraction multi-step problems in contexts, deciding which operations and methods to use and why
•identify multiples and factors, including finding all factor pairs of a number, and common factors of 2 numbers
•know and use the vocabulary of prime numbers, prime factors and composite (non-prime) numbers
•establish whether a number up to 100 is prime and recall prime numbers up to 19
•multiply numbers up to 4 digits by a one- or two-digit number using a formal written method, including long multiplication for two-digit numbers
•multiply and divide numbers mentally, drawing upon known facts
•divide numbers up to 4 digits by a one-digit number using the formal written method of short division and interpret remainders appropriately for the context
•multiply and divide whole numbers and those involving decimals by 10, 100 and 1,000
•recognise and use square numbers and cube numbers, and the notation for squared (²) and cubed (³)
•solve problems involving multiplication and division, including using their knowledge of factors and multiples, squares and cubes
•solve problems involving addition, subtraction, multiplication and division and a combination of these, including understanding the meaning of the equals sign
•solve problems involving multiplication and division, including scaling by simple fractions and problems involving simple rates
•compare and order fractions whose denominators are all multiples of the same number
•identify, name and write equivalent fractions of a given fraction, represented visually, including tenths and hundredths

AND MORE!
Add to Cart
All items on the unique classrooms website are subject to copyright ©
Intended for sole use only ©
Made with love in the UK
Photo used under Creative Commons from anka.albrecht