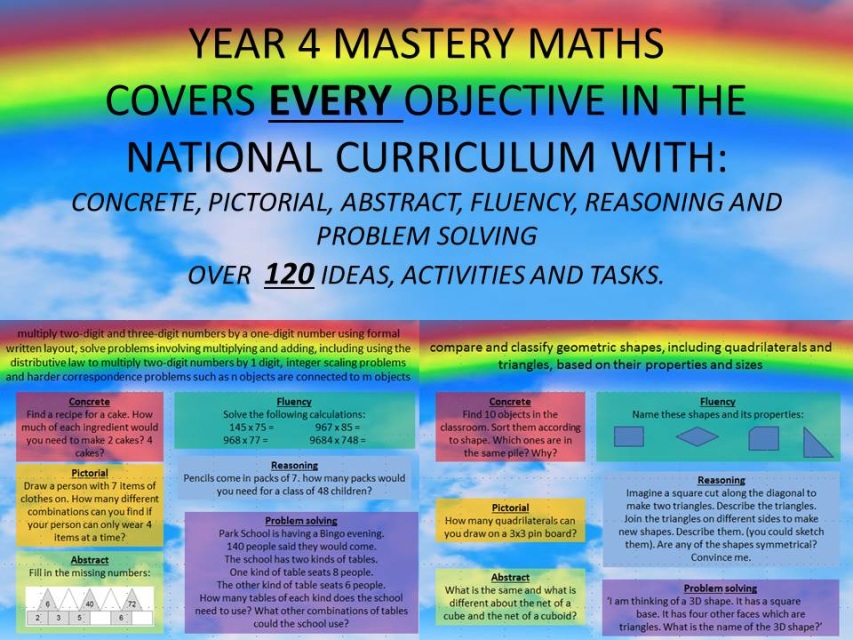 objectives include:
•count in multiples of 6 7 9 25 and 1000
•find 1000 more or less than a given number
•count backwards through 0 to include negative numbers
•recognise the place value of each digit in a four-digit number (ThHTU)
•order and compare numbers beyond 1000
•identify represent and estimate numbers using different representations
•round any number to the nearest 10 100 or 1000
•solve number and practical problems that involve all of the above and with increasingly large positive numbers
•read Roman numerals to 100 (I to C) and know that over time the numeral system changed to include the concept of 0 and place value
•add and subtract numbers with up to 4 digits using the formal written methods of columnar addition and subtraction where appropriate
•estimate and use inverse operations to check answers to a calculation
•solve addition and subtraction two-step problems in contexts deciding which operations and methods to use and why
•recall multiplication and division facts for multiplication tables up to 12 × 12
•use place value known and derived facts to multiply and divide mentally including: multiplying by 0 and 1; dividing by 1; multiplying together 3 numbers
•recognise and use factor pairs and commutativity in mental calculations
•multiply two-digit and three-digit numbers by a one-digit number using formal written layout
•solve problems involving multiplying and adding, including using the distributive law to multiply two-digit numbers by 1 digit, integer scaling problems and harder correspondence problems such as n objects are connected to m objects
•recognise and show (using diagrams) families of common equivalent fractions
•count up and down in hundredths; recognise that hundredths arise when dividing an object by 100 and dividing tenths by 10
•solve problems involving increasingly harder fractions to calculate quantities, and fractions to divide quantities, including non-unit fractions where the answer is a whole number
•add and subtract fractions with the same denominator
•recognise and write decimal equivalents of any number of tenths or hundreds
•recognise and write decimal equivalents to half, quarter and three quarters
•find the effect of dividing a one- or two-digit number by 10 and 100, identifying the value of the digits in the answer as ones, tenths and hundredths
•round decimals with 1 decimal place to the nearest whole number
•compare numbers with the same number of decimal places up to 2 decimal places
and more!