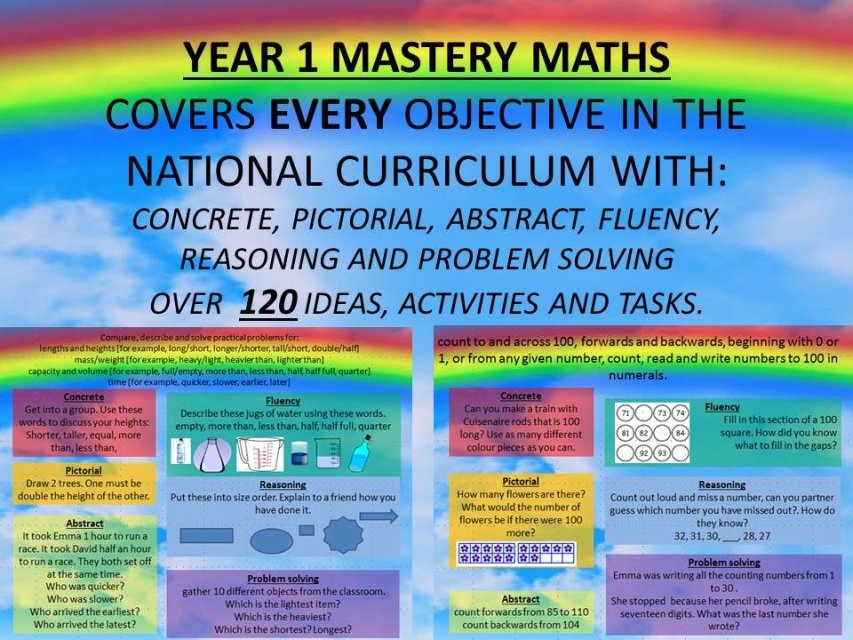 •count to and across 100, forwards and backwards, beginning with 0 or 1, or from any given number
•count, read and write numbers to 100 in numerals; count in multiples of 2s, 5s and 10s
•given a number, identify 1 more and 1 less
•identify and represent numbers using objects and pictorial representations including the number line, and use the language of: equal to, more than, less than (fewer), most, least
•read and write numbers from 1 to 20 in numerals and words
•read, write and interpret mathematical statements involving addition (+), subtraction (-) and equals (=) signs
•represent and use number bonds and related subtraction facts within 20
•add and subtract one-digit and two-digit numbers to 20, including 0
•solve one-step problems that involve addition and subtraction, using concrete objects and pictorial representations, and missing number problems such as 7 = ? ? 9
•solve one-step problems involving multiplication and division, by calculating the answer using concrete objects, pictorial representations and arrays with the support of the teacher
•recognise, find and name a half as 1 of 2 equal parts of an object, shape or quantity
•recognise, find and name a quarter as 1 of 4 equal parts of an object, shape or quantity
•Compare, describe and solve practical problems for: lengths and heights [for example, long/short, longer/shorter, tall/short, double/half]; mass or weight [for example, heavy/light, heavier than, lighter than]; capacity/volume [for example, full/empty, more than, less than, half, half full, quarter]; time [for example, quicker, slower, earlier, later];
•measure and begin to record the following: lengths and height; mass/weight; capacity and volume; time (hours, minutes, seconds)
•recognise and know the value of different denominations of coins and notes
•sequence events in chronological order using language (for example, before and after, next, first, today, yesterday, tomorrow, morning, afternoon and evening)
•describe position direction and movement including whole half quarter and three quarter turns

PLUS MANY MORE OBJECTIVES!
other year groups available